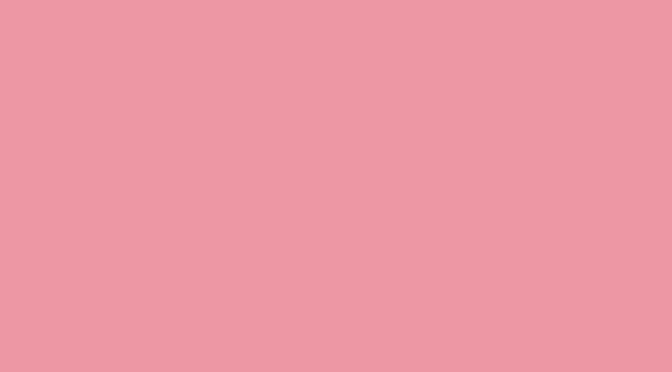 Andy Greenaway, Executive Creative Director of Dentsu Singapore, explains why you should probably wear pink to your next creative pitch.

I’m a big man—six feet and four inches. I weigh 115kg. I’m pretty affable. My old man used to call me his gentle giant. But when people first meet me, they can be intimidated. I’m very much aware of that. So I wear a pink shirt.

Pink has a calming effect on people, which helps me come across as more approachable—an important factor for anyone in a new business environment.

Ridiculous, I can hear some of you saying. Not according to Dr. Alexander Schauss, who was Director of Life Sciences at the American Institute for Biosocial Research in Tacoma back in the 1960s.

Dr. Schauss had conducted experiments with colors and discovered that a certain shade of pink calmed people down. That color became known as Schauss Pink (and also P-618).

Dr. Schauss noted that by merely staring at an 18 × 24 inch card printed with this color, especially after exercising, there would result “a marked effect on lowering the heart rate, pulse and respiration as compared to other colors”.

In 1979, Schauss managed to convince the directors of a Naval correctional institute in Seattle to paint some prison confinement cells pink, in order to determine the effects this might have on prisoners.

At the correctional facility, the rates of assault before and after the interior was painted pink were monitored. According to the Navy’s report, “Since the initiation of this procedure on March 1, 1979, there have been no incidents of erratic or hostile behavior during the initial phase of confinement.” Only fifteen minutes of exposure was enough to ensure that the potential for violent or aggressive behavior had been reduced, the report stated.

Another surprising effect was discovered years later by researchers at Johns Hopkins University, who observed that Schauss Pink had an impact on appetite suppression. Tinted sunglasses that paint the world in a Schauss hue have since been marketed over the decades as a weight-loss tool.

Of course, while this knowledge can be helpful, it can also be used in nefarious ways. During the ‘80s, college football teams in Colorado State would paint the visiting team’s locker room in Schauss Pink in an attempt to relax the opposing team—a detrimental physiological state in a highly-charged physical sport.

The impact was deemed to be so intrusive that the Western Athletic Conference governing body introduced a rule where both teams’ locker rooms had to be painted the same color.

So what colors are right for your brand? Below is a chart that explains the positive emotions and feelings that different colors can afford your brand.

Prada loves black because it conveys sophistication. Barclays, Standard Chartered and Citibank are blue. Makes sense, since these institutions would want you to trust them with your money. Subway and Starbucks are green. Because who wants stale coffee and sandwiches? Nobody. We want them fresh. Even BP turned to green in an attempt to convince us that they were for a greener planet.

So, back to Schauss Pink. If you’re in a stressful environment, or you’re about to go into a room full of anxious people, roll out the Schauss Pink. It could make all the difference in the world.

Does Schauss Pink have an effect on my pitch rate? I do not have any empirical evidence to prove it does. But I can say my pitch rate has been pretty good over the years. At Dentsu, my latest agency, we have a winning strike rate of 60% and above. I guess I’ll keep on wearing that pink shirt.

Having held several senior creative and commercial roles in agencies in the SEA region, Andy Greenaway now leads regional creatives as the Executive Creative Director of Dentsu, Singapore. Over a distinguished, colorful career, Greenaway is a consistent figure on top of the Campaign Brief Asia Creative Rankings.