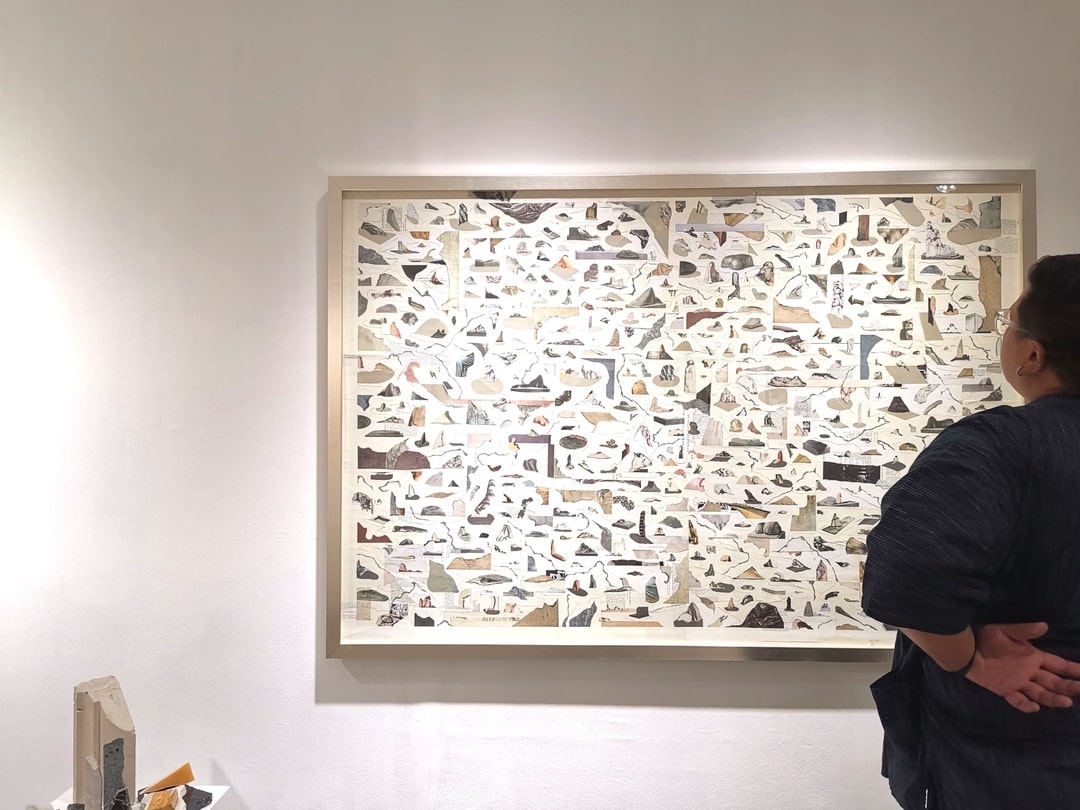 Tell me about your work. What does it mean? What is it trying to say? Interviews with artists - especially with those whose work tends to be abstract - often start with questions like these. In this interview for the Crafters, collage artist Jel Suarez chose not to answer these questionsÑand yet sheÕs given us much to think about.ÒI find it hard to explain, to be honest,Ó the twenty eight-year-old artist admits, when prodded about the meaning of her work.The work in questionÑa massive collage she had been working on for her solo exhibition, Òobject readerÓÑwas a sight to behold. A meticulously arranged cluster of objects that you canÕt imagine being put together in any other way, each image is completely different from the one next to it, and yet almost exactly the same in natureÑlike a family of found objects coming together to tell a shared story.ÒI feel like a lot of people are obsessed with ÔmeaningÕ when it comes to art. Ako, feeling ko mas obsessed ako sa process ko. ÔYun talaga Ôyung favorite ko e, Ôyung mismong act ng paggupit,Ó she says. ÒIn the future, I want to put up a show that focuses solely on the act of cutting. I just havenÕt figured out how I would do it.ÓWhile Suarez certainly takes cutting paper to a whole new level of precision, she revealed that her processes are not always a straight line. ÒWhen I start cutting, hindi ko na siya na-co-control eh. Once I get hold of the right books, I just work nonstop.Hindi ko iniisip Ôyung end product,Ó she shares.And while she doesnÕt see anything wrong with finding meaning in art, Suarez feels like it isnÕt up to her to tell people what her art should mean. ÒMy work is open to interpretation, so I let the people decide what my art means to them,Ó she says. However, all this is not to say that SuarezÕs work is devoid of meaning, or that her art, as end products, are anything short of spectacular. In fact, such a strong dedication to her unique (but vastly unpredictable) process has steadily impressed critics and helped reignite interest in creating collages solely by hand.

Art as a journey to self-discoveryTo Suarez, art is more a path to a higher understanding of herself than it is an expression of what she already knows to be true.ÒMost of the time, I start with no clear concept of what I want to do. Madalas, ang tagal ko talagang blangko. Pero kapag nakita ko na Ôyung libro or images na gusto kong gamitin, tuloy tuloy na sya,Ó she says.Suarez also acknowledged her difficulty in expressing herself with words, and says that her works are often physical manifestations of what goes on in her head. To her, the act of deconstructing images is a way of letting her mind solve its own puzzlesÑa cathartic voyage of self-discovery and self-help. This makes it no surprise that her work often evokes a certain complexity that is introspective and restrained, but at the same time expansive and generous in its ability to make a person feel a full range of emotions.But for someone who started cutting books (as well as photos of her favorite celebrities) at a very young age, Suarez says that her definition of collage had to evolve as she got older. ÒSiguro noong bata ako, mas free akoÉginugupit ko lang Ôyung gusto ko. When I started exhibiting my work, parang nagka-pressure, lalo na thereÕs a need din for art to be an extension of your identity.ÓSuarez also talked about how she continues to struggle to gauge the quality of her work, and to recognize when sheÕs making progress in terms of honing her skills. ÒWith painting, or sculpting, I think mas madaling makita kung nag-iimprove ka. But with collage, kapag nandoon ka na sa process mismo, you just let it flow. Personally, I donÕt think about whether a particular work looks better than the last. Kaya minsan, may feeling ako na kulang pa Ôyung skills ko sa paggawa ng work na gusto kong gawin,Ó she explains.Improvement, to Suarez, is clearly not a function of aesthetic. Rather, it is a strengthened sense of self that radiates through her art, which moves her in directions that help her make sense of the world. This is probably why she continues to experiment with different materials that allow her to refine her process and extend her vision beyond paper.

"object reader"Êis currently on display at MO_Space from March 23 to April 21. Photo courtesy of Jel Suarez

Working with new materialsSuarez has always worked with paper, but her arsenal of materials has grown steadily over the past yearsÑwith marble being her most recent addition.Her previous solo exhibition, titled ÒTraces By Which We Remember,Ó held at West Gallery, tackled a specific occurrence in peopleÕs thought processes that triggers certain memories (or at least fragments of a memory long forgotten), which the artist aptly described as Òinvoluntary remembering.Ó Her work for this exhibit won her the Embassy of Italy Purchase Prize at the Ateneo Art Awards, an important detail that Suarez did not mention during the interview. Instead, she talked in great detail about the process of working with marble, which was the material she used for some of her pieces in the exhibit. ÒFirst time ko gumamit ng marble, kasi Ôyung collages ko mostly [images of] sculptures yung ginagamit ko. First time na yung collage ko nilagay ko doon sa mismong marble,Ó she said, and went on to tell me more about Òobject reader,Ó in which marble will also make an appearance.ÒFor this show naman, madalas ako nag-vi-visit doon sa warehouse na nahanap ko sa Pasig na pagawaan ng marble. I just kept going there because I was drawn to the different kinds of marble used to make countertops and floors.ÓÒI found this black marquina which had creases that looked similar to some of my existing work. Then I thought about how I usually discard the texts from the books I cut, and how these strips of black marquina actually resembled blocks of text. ThatÕs how I got the idea of using them for the showÑas replacements for the chunks of text I leave out when I cut the images from a book.Ó

ÒFor me, collage is also about deconstructing the message of the text. So parang ang naiiwan lang is Ôyung images, Ôyung fragments.Ó object reader is currently on display at MO_Space from March 23 to April 21. Photo by Joyce Reyes

Although her fascination with marble has influenced most of her previous work, Suarez sees this as her gaining a deeper understanding of her preference in patterns, textures, and colors. To her, the physical presence of marble in her shows are only there to support her central workÑwhich are still her cut-and-paste collages. ÒI guess wala naman akong tina-try sabihin talaga. I just want to work with the materials that are available to me, and to understand the nature of each material through deconstruction,Ó she says, after much thinking.ÒMadalas mas gusto ko Ôyung ginawa ko, kaysa doon sa product. Every time nakakatapos ako ng work, ayoko na siya,Ó she says with a laugh. ÒThe process itself is all I know.ÓAnd yet, for someone who doesnÕt feel the need to ÒmeanÓ anything with her art, SuarezÕs works have so much to say.****Òobject readerÓ is the first solo exhibition of Jel Suarez at MO_Space, located at 9th Avenue, Bonifacio High Street, BGC, Taguig, Meto Manila. It is on display from March 23 to April 21, 2019. Learn more about it here.