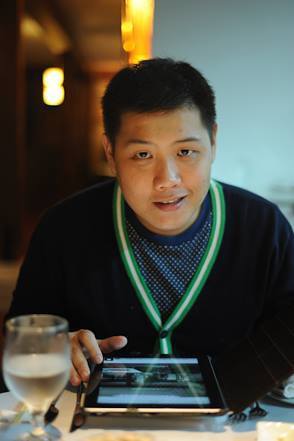 Nathaniel Uy is literally in all aspects The Hungry Chef. He is a cook by profession and he’s also the first to admit that he’s always hungry by choice. For him, it started while he was in culinary school in 2013, and he joined the share-your-meal-on-IG bandwagon without any agenda. “I decided to post my thoughts and opinions on food I ate on instagram, just to make it sort of like my food diary,” he recalled.

“Passion should drive your blog,” Nathaniel told The Crafters in an interview, noting that whether its sponsored content or not, when you remove passion from the equation, then it’s just a post. He said that rather than wait for invites from restaurants, the genuine food lover should go out and try the new restaurant around the corner if they want to and even if they have to pay.

X-deals aren’t as bad as they seem

That doesn’t mean, however, that Nathaniel is saying no to x-deals completely. “I am currently in collaboration with Gold’s Gym, I believe that as long as it’s a win-win for both parties then it’s okay,” he added. The engagement is also aligned with the chef’s goal of changing misconceptions about chefs having unhealthy lifestyles.

As a food consultant, Nathaniel is forthcoming with restaurants he reviews. “Usually if I know the restaurant owners or I’ve met them, I give the feedback right there and there but if not that’s when I write about it,” he said. His thinking is that only by being upfront with clients can criticism be constructive.

Nathaniel doesn’t see the point in giving bad feedback for the sake of it. He encourages food bloggers to keep in mind that their opinion can impact the business. So the next time  you think of something negative to say about your client, tell them that feedback. Besides, aren’t influencers ultimately partners in making the business better?

How To Rise Above #Foodie Photos

Mikki Galang Is A Breath of Fresh (H)air