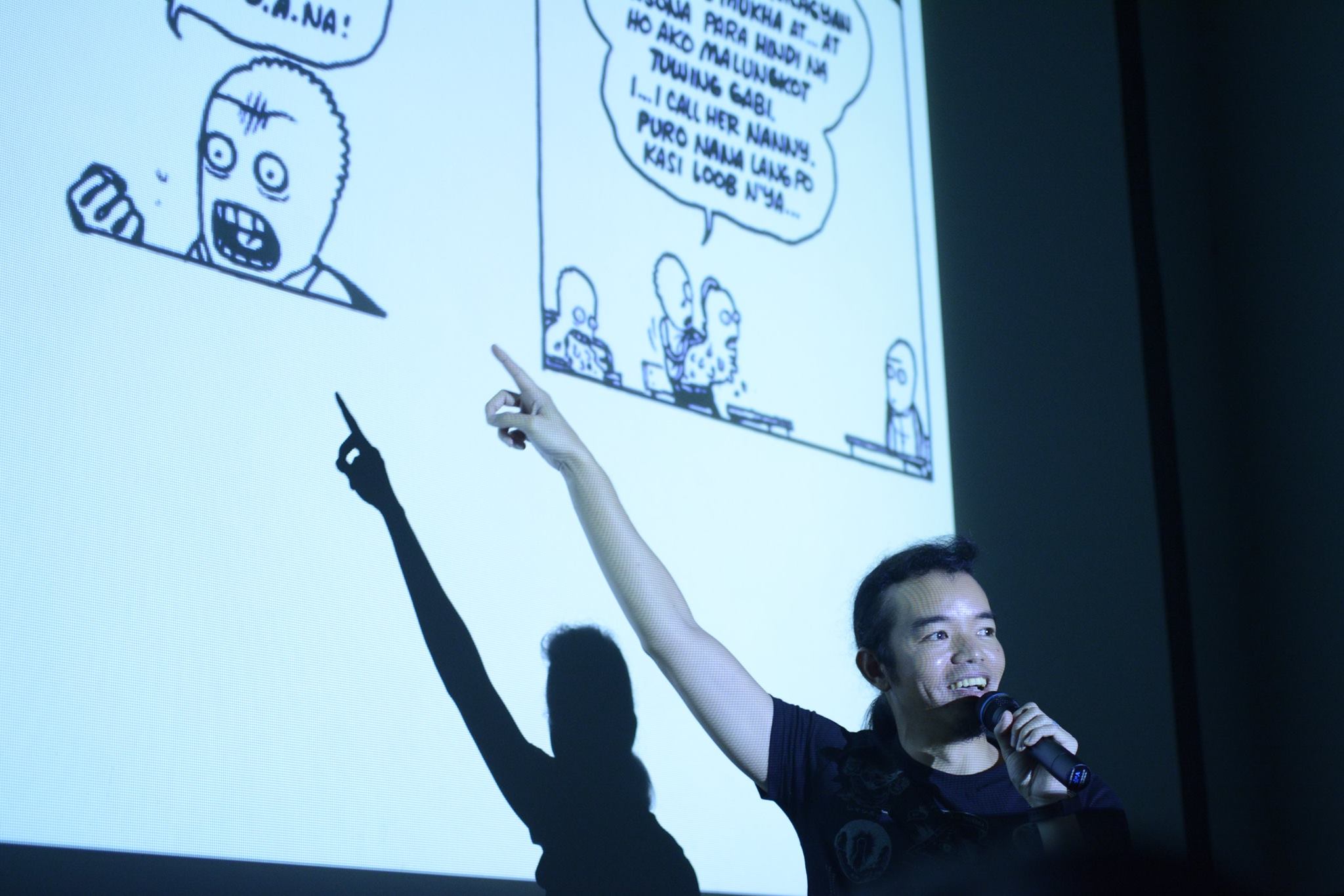 Manuel “Manix” Abrera could actually do without an introduction. As a household name in the local comic book industry, much has already been said about his body of work, which, over the years, has taken a life of its own on both print and digital platforms.

Any person who has flipped through a newspaper at least once would be familiar with ‘Kikomachine,’ Manix’s long-running comic strip series that hark to distinct Filipino values and quirks, encapsulated in sequences that show a slice of life in various mundane settings.

His characters, which are charming creatures a lot of us have come to love, represent this generation with such keen accuracy and careful nuance that only an artist with his level of sensitivity and unassuming humor could pull off.

But while a chunk of his work portrays the common realities of university life, Manix also isn’t afraid to step out of this formula to explore the realms of the surreal and the speculative. Still, even when he ventures into newer forms of storytelling, his comics are never at a loss of his signature wit, silliness, and self-awareness that has won the hearts of so many.

If you’ve never read any of Manix’s work, to say that you’re missing out is an understatement. Thankfully, this award-winning artist shows no signs of slowing down. ‘Kikomachine’ still runs from Monday to Saturday in the Philippine Daily Inquirer, and has twelve book compilations published by Visprint. You can also find his webcomic News Hardcore! weekly on GMA News Online.

But with all the creative work he manages to produce on a regular basis, a lot of us wonder how he goes about his day to actually get all this amazing stuff done. In this short email interview with The Crafters, Manix talks about how he’s been doing it ever since he first dabbled in creating comics. We were also able to ask him a few (rather unrelated, yikes!) questions about promoting his work in the digital age, as well as working with brands and being seen as a brand himself.

You took up Fine Arts at UP Diliman, but you said once in an interview that you’re “really more self-taught than trained.” How do you think your style would have differed had you not taken up the same course at the same university? What was the role of UP in your creative journey as a comic artist?

[I also can’t say what my style would be like had I chosen a different path, hehe. However, I’m grateful for having been lucky enough to be a part of the Philippine Collegian (our University Paper). From there I learned and got used to drawing a lot, with content, and on deadline—since our editors were quite tough. It was also through them that I got used to creating comics that are grounded in good stories; style or technique alone won’t do the trick.]

Over time, you have developed a certain style that is distinctly your own. Is there a conscious effort to maintain this specific style? Which aspects of your work continue to evolve? How has Kikomachine changed since it was first published on the Philippine Daily Inquirer in 2001?

[Thank you! It’s not a conscious effort. [My style] continues to evolve—both in terms of drawing and storytelling. If you’d notice, the characters from my first book look so different from the characters I draw now. My style changes as I draw and tell stories every day, and sometimes my art takes on forms that I don’t even plan—they just happen—which is why it’s also an exciting experience for me. I also try to give myself restrictions or limitations when it comes to my work (comics). For example, I try to create comics with characters who are literally just dust. Sometimes my comics are wordless.]

A preview from “12” by Manix Abrera

A lot of creators struggle with deadlines, especially if it’s for a piece of work that they want to make perfect. Do you have a healthy relationship with deadlines? How do you balance your need to create something you’re proud of with the need to turn in your work on time?

[I also had a hard time with deadlines in the beginning, of course. I just got used to meeting and beating them since I have no other choice. It’s important to know what kind of artist you are, and which one you’re good at: Embarking on a task way before the deadline, or tackling it when it’s already crunch time. That depends on you. What I do is immediately write down all the stories I could think of, so that I already have an idea of the script/story I want to tell even if the deadline is still far ahead. This makes it easier for me to start and draw.]

Also read: The Curious Case Of Creative Block: Waiting For Inspiration To Strike

How do you feel about being called a brand (either as Manix Abrera or as Kikomachine)? How did this perception of you or Kikomachine as a brand impact your creative process?

You’ve done illustration work and collaborated with a number of brands. How do you decide whether or not to work with a certain brand, and how do you make sure you remain true to your own brand?

[I separate the work I do for myself (Kikomachine Komix, etc.) from the work I do on the side. If I am commissioned to create comics for a brand, I’d create different characters and stories for them. But if it’s a tribute to my own work (say, the San Miguel Pale Pilsen ad), it’s okay for me to use my original characters.]

The digital age has forever changed how comics are created and shared. As someone who started making comics way before anything or anyone went “viral” on social media, how do you keep up with the evolving digital space? Have you adopted new practices in the way you market your art?

[What’s great about the world we live in now is that it allows us to quickly spread our work via the internet. It’s great to see [the internet] as a new kind of platform, an addition to the existing platforms we use. It’s better to see it as a tool, not a hindrance. I also use social media heavily to spread my work.]

Tell us about your creative process and what a normal “work day” looks like for you.

[My processes vary, and my days all look different. I try not to stick to a routine when it comes to creating. My formula involves collecting and writing down stories before I get to the drawing part. Sometimes I draw in the morning, and sometimes I do it at night. I also love to travel to different places, to go to the beach, and to go mountain-climbing—and I always like to draw wherever I am.]

Any tips for aspiring comic creators?

[For me, any work must be able to say something worthwhile, no matter how big or small it is. It’s also important to be observant, both as a storyteller and as an artist, because there are so many great stories around us.]