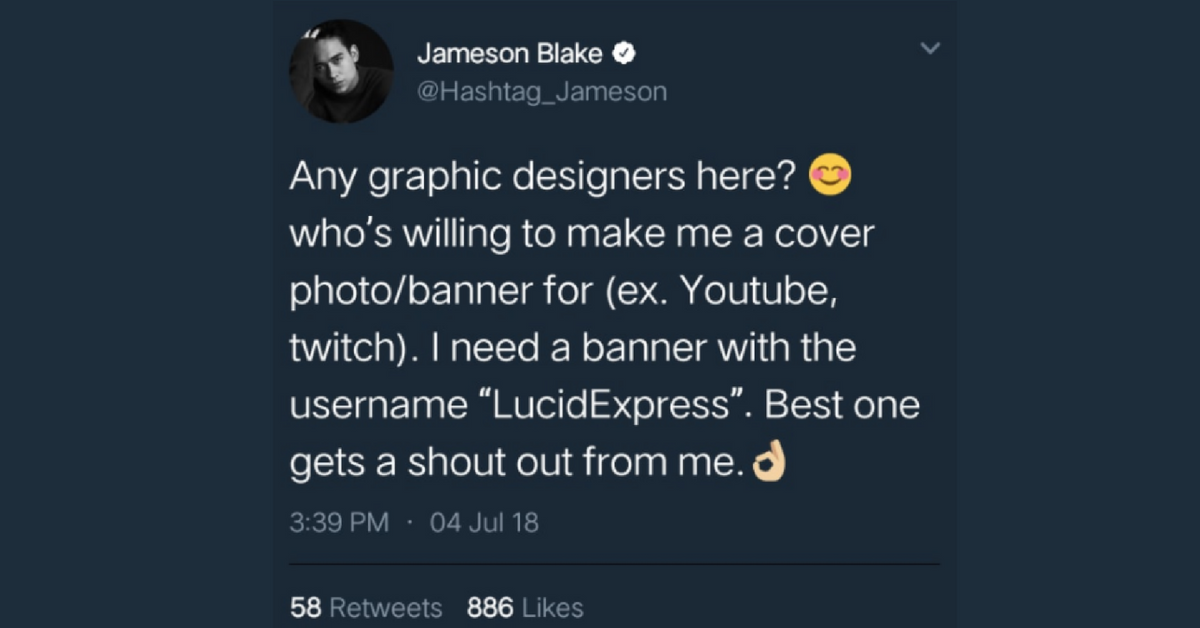 When Pinoy Big Brother alumnus and Hashtag member Jameson Blake took to Twitter to look for a graphic designer willing to work in exchange for “a shout out,” he hit a raw nerve among Filipino creatives. His seemingly innocent request for a social media banner broke the internet with the criticism it invited.

“Shame on you,” director Gino Santos said on Twitter, tagging Jameson. “These graphic designers or artists did not graduate from their respective schools and spend countless hours honing their craft just to get a shout out,” he added.

On the fact that someone did end up producing graphics design for Jameson in response to the open call, he remarked: “I hope that poor girl got something besides just a mention. Set an example. Be more than a celebrity.”

There were some, of course, who defended Jameson Blake by saying that he was not forcing anyone to do what he needed done. “It is still on the hands of the graphic designer if he wants to do it for a shoutout. Why make it a big deal?,” one tweeted.

The entitlement was pronounced, folks on Twitter said, when Jameson Blake issued what they called a non-apology. “It was just a favor,” the actor tweeted. “Probably a shoutout would have done nothing but I could have returned the favor by promoting the artwork.”

Jameson Blake is definitely not the first to try and find a creative willing to do gratis work, something FHM Philippines eloquently pointed out when it said that “his request is symptomatic of what is plaguing the design and content industry: a lack of respect.”

This lack of respect leading to a creative industry that ironically undervalues creative work is in fact a common complaint among respondents in our Digital Creative Economy Survey.

“Some perceive creative work as nothing more than just people doodling and drawing, but are horribly misinformed about the difficulties designers face thinking about new layouts and concepts,” a respondent said.

Another lamented: “I’ve listened to too many friends talk about pouring their blood, sweat, and tears into projects only to be paid a year later if at all, or for projects to suddenly fold up without them getting a single cent… We have a lot of talented creatives and they deserve better.”

Paid late, if paid at all

Half of the creatives who have so far answered our survey claimed they get paid late. This is true not only for graphic designers but also for writers (Read: Freelance Writing Is Not Just a Racket). “There are clients who don’t pay. Some will need to be reminded to pay repeatedly, asking for payment can sometimes be like pulling teeth,” one survey respondent said.

You can ask for payment in tranches to be given to you at certain milestones you set for the project, still cannot be assured that clients will honor the agreement. “[Freelancers] are branded difficult and thus not given more projects if clients notice that they demand for payment on time,” a respondent said.

It doesn’t help that there’s no standard rate for creatives, resulting in a haggle for a rate with no floor or ceiling. When it comes to pricing, “every client interaction is a battle,” a photographer in our survey said.

We wouldn’t be surprised if, unsure whether you’re asking for too much or too little and knowing that work is difficult to come by lately, you end up taking whatever the client is willing to pay. Beggars can’t be choosers, you think. But are you really begging?

Although creative pricing changes per project, you can ease the struggle when you benchmark against the rates of others. At GetCraft, creatives post sample work alongside their rates. These prices, though subject to negotiation, give you a lay of the land.

So how much would Jameson Blake have paid a graphic designer? Depending on his design requirements, it could go for as low as PHP 500 (USD 10) and for, say, a full suite of social media assets fitted to a brand design, as high as PHP 25,000 (USD 460).

Discover and work with Southeast Asia’s best designers on GetCraft

Respect for the craft

Is that something you can settle for? If this debate made anything clear, it’s that only you can decide. The designer who did the gratis work for Jameson, for instance, though hit for “tolerating” the actor, also argued she was happy to do it, and that was enough.

Still, amid comments that X-deals are really how it’s done or that getting a celebrity shoutout could be how creatives can jumpstart their careers, another graphic designer, Eunice Enrera, encouraged her peers to decide for themselves how they value their craft.

“Although it is true that we get promoted and get networks with different people or potential clients, if we let other people in different industries define our value as working professionals, then whatever we are doing passionately will never be valued,” she said.

“It is also up to you, the artist, [to determine] how much you value your career, talent, sweat, blood, education, tears and experience. Is it going to be money? Recognition? Fame? Celebrity Shout outs? It is up to you to decide,” Eunice said.

We are still running the Philippine Digital Creative Economy Survey to spark a conversation among industry stakeholders about the challenges creatives are facing. Take 5 minutes to answer our survey here; we’ll get the right people to listen.

How To Survive (And Thrive) As A Freelance Writer

Can Influencers Be Choosy With Brands?